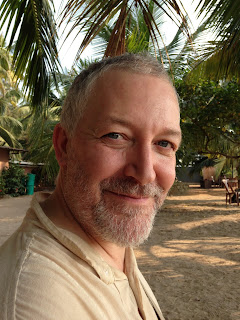 I first met Simon Reynolds in 1988, on the set of Friday the 13th:The Series. He was already an established actor, playing Murray Amherst on the tv series Check It Out (1985-87) as well as having guest appearances on the popular 80’s hit show Night Heat and many others.

I was just an extra starting out in the tv/film industry, and doing background work and being on set with all the action was exciting. As time passed, I saw a lot of background people get called while others were waiting around reading a book and seemed to be just as happy to be called or not since they were getting paid regardless. I decided to see if I could create my own destiny and with permission I decided to walk around.

Filming was taking place at De La Salle College, a popular Catholic high school. As I walked around I noticed the director getting ready to film behind the school. I heard him instruct a few extras that were around to cry. “I need students crying ... someone just died.” I seized the opportunity. I jumped in and started bawling. The director pointed at me and two guys. “You, you and you “. I was in heaven! That’s when I met Simon. My very first scene was to cry while the two students consoled me and I had to walk right by Simon. It took only a few takes to my dismay (I was having too much fun and was hoping for more time doing what I love) and I remember the then 19 year old Simon who introduced himself right away was kind, friendly and very intelligent.

I was lucky enough to be asked to come back the rest of the week. I ended up doing a lot more scenes, from being in a prom dance, to watching a student plunge to his death from the school’s roof top while I, in the freezing cold, wearing only a dress, had to react to the fall.

The week was so much fun for many reasons. I got to reaffirm to myself how much I loved the tv/film industry and the people in it but most importantly I met this talented young actor that took time to sit with me and the other extras and even agreed to do an interview for my High School paper.

Weeks later he kept that promise and came for the interview.

Although we both became busy with our own lives and careers, I never forgot the wonderful and talented person that he is.

When I wrote the Farook character, a playful and interesting hotel guest, I came to realize how deep and complex this character was and I would have to get an actor of sufficient calibre, just like I did with John O’Hurley playing the director.

Having followed Simon’s career and never forgetting the kindness he showed that very first day on the set and the days that followed, I decided to give him a shout all the way to India where he currently resides and see if he would be interested.

He not only blew me away with how well he interpreted the script but his audition was one of my favourites exceeding all expectations. He even learned how to speak Finnish, committing to the character fully and passionately.

It is with great pleasure that I introduce to you the very talented and memorable Simon Reynolds in the role of Farook.
Posted by Maria Dalekos at 9:32 AM