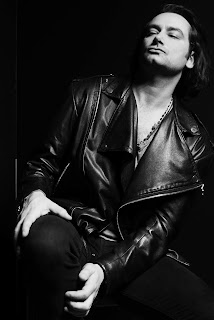 I’ve travelled through various cities to find my sailor. From Athens to Crete then Vancouver and LA but success came in Toronto. Technically it would have happened in New York but a very accommodating and talented actor came to see me here instead... and our Yianni was finally discovered.

And this is how it all began. He arrived at Pearson International airport with his cowboy hat. He was incredibly handsome but at first appeared a bit shy. As he got in the car and started conversing I knew he had the personality I was looking for to be a part of an incredible cast already assembled. I already knew he was a great actor but was he the right man to play Yianni the sailor?

I wanted Yianni to look in his mid to late thirties, handsome and very sexy. It is important to me that Yianni is not a playboy instead he’s intelligent with a past often in deep thought like a philosopher but incredibly charming.

The auditions took place a few hours after I dropped him to his hotel. He entered the room and as he began his audition we knew then he was our Yianni. There was no question in my mind that we had found our sailor.

It is these moments, part of the process of filmmaking that I enjoy the most because you see your vision becoming a reality. This guy delivered his lines authentically, with the right amount of charm and when he sang the goosebumps were visibly present. Chemistry was high. Wow!

Constantine Maroulis will play the Greek sailor and we’re excited because we know that this 2x Tony nominated actor will win the hearts of audiences all over the world with his authentic self.

I write these blogs  to keep the already passionate fans abreast of what’s happening and for aspiring independent filmmakers to see the amount of work it takes to go through the art of making a movie with a small budget but with people who have true passion, dedication and perseverance. This has not been an easy road but it is the difficulties along the way that have made us stronger demanding more of ourselves and others in order to make the vision a reality.

Like I told Constantine that night ... we’ve seen many talented and well known actors but he had that “it” factor that I hadn’t seen before.

Welcome Constantine we look forward to have you be a part of our adventure.

Posted by Maria Dalekos at 7:39 AM